I finally got a pair of Snowshoes last week (the MSR Evo 22, since they seemed the most versatile... they can be extended for better flotation). I've taken photos in the snow in the past, but it's so much work to get off of the beaten path, I thought that snowshoes would help quite a bit... and they did.

Usually when I ride along with 4 wheelers, I run ahead at some point and shoot back down the road (either video or still) as the trucks break through the fresh snow. Without snowshoes, though... I never made it more than about 50 feet ahead of the trucks, since it's so much work and such slow going. The snowshoes make all the difference... I could tromp up the hill without too much trouble and get prepared.

Once we reached a point where it was slow going for the trucks, we stopped for a bite to eat and headed up the road in snowshoes. It was snowing pretty hard, but not too dark to take photos. I was pretty worn out at that point, so I followed behind the other guys and took photo (and frequent breaks).

Not the perfect weather for photography, but great weather for playing in the snow. With the exception of a couple minor delays, I think we all had a good time; much better than last New Years Day, when we hardly had any snow and we were all pretty well soaked from the rain.

Great post. You caught that one of the valley at just the right moment before the sun went away. Great shot! They're all great! Nice to have you come along.

edit: finally got my pictures up. Here's a few snowshoeing pictures I'm sure my pictures must be painful for you to look at...hopefully not to painfull. Basically all I do is dump off the camera, then drop the folder on a photoshop droplet that automatically resizes and compresses them all. I used to have it automatically apply "auto levels", but stopped doing that since I didn't like the result being applied on some images. If you really think I should do it, I will reapply the auto levels. One things is for certain, I don't have enough time or knowledge to manually process every image.

Here is one with the "auto levels" applied.

Well, it does look better with auto levels in that image, but that has a tendency to mess up your blacks and greys, too... and just generally make your contrast too high. There's really no automatic way to get things right though, except when you're taking the picture. For those who are curious, here's one way to make the corrections:

This is just an excuse to use my new video intro, actually...

That was actually very helpful. Occassionaly I get decent pic that I want to process properly.

But, if I understand correctly, the main problem is the camera. I have a 10 year old Olympus C-3030. I always just use the auto settings. I can manually choose a White Balance of Auto, Daylight, Overcast, tungsten light, or fluorescent. Would that help?
WINTER IS HERE
Top

The problem actually isn't the camera, but yes... it's with the camera settings. No matter how new and expensive your camera is, if you point it at a white wall (or field of snow), the camera has no way of knowing whether you're looking at a white wall, or a grey wall in bright light, or a black wall in really bright light, etc. So it exposes everything so that the scene averages medium grey. There are some minor improvements in modern metering systems, but mostly they're going to produce the same results as your camera did.

White balance isn't the issue, though. What you'll need to do is use "Exposure Compensation". It lets you dial in extra light, usually in half f-stop intervals... +0.5 , +1, +1.5, etc The problem is that you have to change it depending on how much of the scene is white. With pro-level SLRs, there's an easy control dial so you can do it quickly and easily between shots. With point and shoots, it's a pain.
Loser By Choice

Thanks :) I took another photo at about the same time, but vertical instead of horizontal.... I'm not really sure which one I like better. 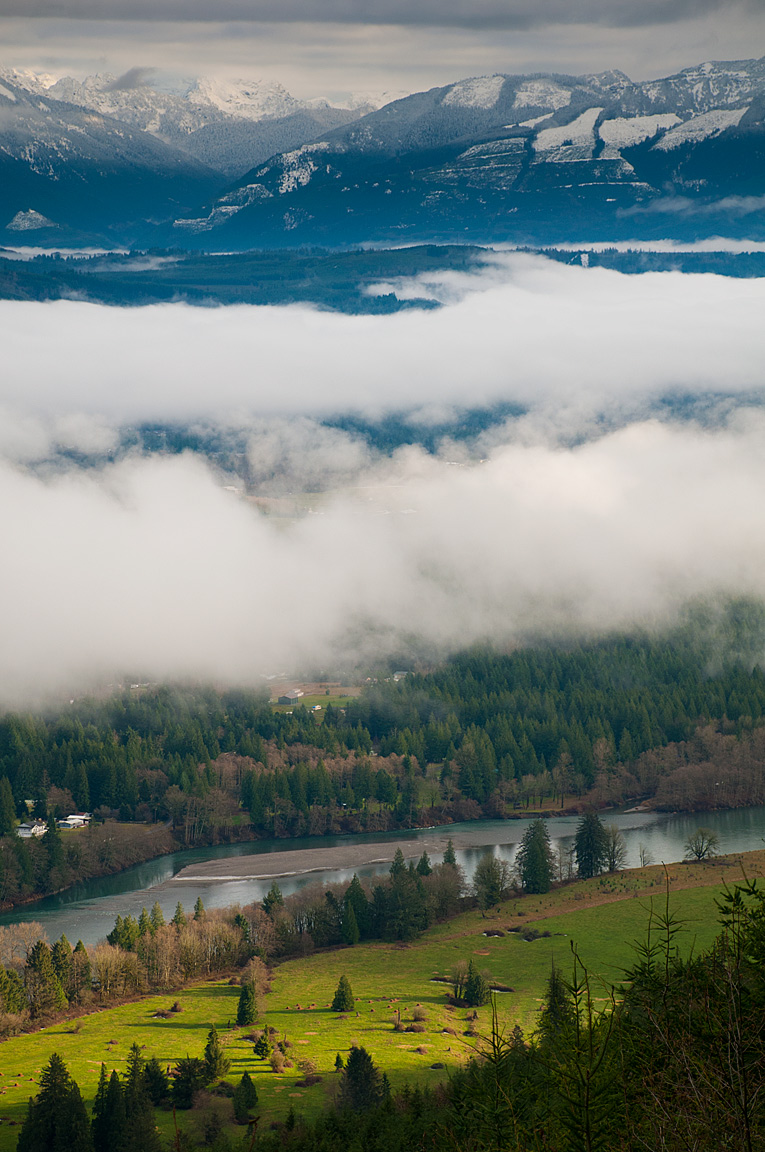 I like the first one better. It seems to have more depth to it, and really captures the snow line on the nearby hill.
WINTER IS HERE
Top
Post Reply
11 posts